As farmers around the world face challenges in the use of herbicides in crop production, autonomous robot, capable of mechanical weeding on the field, offers farmers an attractive alternative. At the online robot webinar “Robots for mechanical weeding” organized by the DLG (the German Agricultural Society) on 16th June 2020, international experts in field robots from academia, research and industry discussed what is practically possible for farmers today, including using field robots during the Covid-19 pandemic.
Mechanical weeding offers a solution to farmers in a number of ways. “Either the herbicide does not work as well or is not allowed anymore or, in some cases, societal pressure means some products, like glyphosate, cannot be used anymore. This is where autonomous mechanical weeding could provide a key solution,” said Klaus Erdle, DLG Competence Center Agriculture, introducing the DLG Feldtage Digital webinar premiering this year.
Designed for fields of up to 20 hectares, commercial robots with the dual feature of seeding and weeding from the Danish company FarmDroid are already working on several European farms, having covered more than 1000 hectares in the Spring of 2020. Using high-precision geo coordinates to seed and weed, the robots are solar powered with a back-up battery and operate with 8 mm accuracy within and between rows, which means manual weeding is significantly reduced and in some cases not necessary at all”
“As a fast response to the Covid-19 pandemic one customer even ordered a second robot”, says René Jannick Jørgensen, CEO of FarmDroid, which shows that mechanical weeding robots are already considered to be reliable workers, also in a crisis.
The autonomous robot, which weighs some 700 kilos and has a working width of three metres, works both thoroughly and precisely at a steady pace of between 450 and 900 metres per hour. The FarmDroid can be left in the field over the season and will carry out the work by itself through its connection with the RTK station. 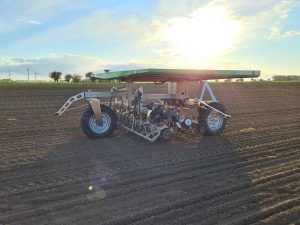 Arno Ruckelshausen, Professor at the University of Applied Sciences Osnabrueck, Faculty of Engineering and Computer Science, Germany, noted that there are still legal and technical obstacles that need to be overcome before field robots will overtake the herbicide solutions.
With 30 years’ experience in mechanical weeding and field robot solutions for tractor-driven implements, including various sensor technologies, Germany company K.U.L.T. (Kress Umweltschonende Landtechnik GmbH) showed that autonomous mechanical weeding in the field is possible, but currently due to legal constraints still needs to be supervised by the driver.
In fact, farmers need to be actively involved when employing a field robot. “Farmers have to make a step towards the robot too, being open-minded for new developments, but also things like security systems to make them stop if there is a problem and, of course, they need to monitor the robot. A full control of the systems is important for the future set-up on farms,” explained Christian Kirchhoff, CEO, K.U.L.T., to the 450 viewers. 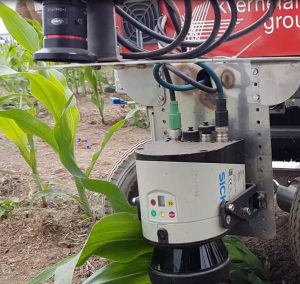 Practical farming expert, Dr. Beat Vinzent, Bavarian State Research Center for Agriculture, Germany, agreed. “It is a bit like when dairy farmers first discovered milk robots. They needed some time to adjust to the fact they were no longer just dairy farmers, but needed to learn to handle the system. But in the end this turned out to be just a transition period.
“How successful the adoption of robots by farmers continues to be in the end will certainly depend on the reliability of the systems and on whether farmers own the robots or if they just buy the robot work as a service from a contractor,” added Dr. Vinzent.

Field requirements, wear parts, remote service and security
“From our experience we know that farmers are ready to adopt the technology, even many small farmers,” commented René Jørgensen, CEO of FarmDroid. “They recognize it still requires some effort. The wear parts need to be considered since minimal tillage can be hard on tools, so the farmer of course has to ensure that the parts are in good condition. Simply speaking, the same attention you give a tractor, you need to give a robot. We can track the robot any time, if required for security reasons, and we are also currently setting up a remote support centre that can identify any issue and deal with it before it become a problem in the field,” added Jørgensen.
The requirements for some robots, like the one from FarmDroid, state that the field should not exceed 10 degrees slope which is determined by the power-to-weight ratio of the robot.

Return on investment within two years
Questions from online attendees covered investments and costs “How much do I have to invest?” “What is the return on investment?” “How high are the costs of maintenance?”
“Seven hectares and above gives a feasible business case, dependent of the crop type” explained Jørgensen. “Return on investment is less than two years in a typical scenario in which a farmer uses the robot for organic sugar beets for the spring season and then again for rapeseed, or any other similar crops, in the autumn. We have had creative farmers who have utilized it for many different crops and herbs, thus they themselves have managed to improve the business case beyond our calculations,” added Jørgensen.
“The FarmDroid robot can be easily transported to another field using a tractor to get an even better business case by covering more hectares,“ he added. 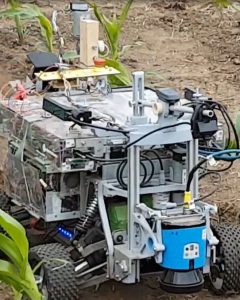 The prices of robots reflect their functions. The field robots from K.U.L.T., which uses a combination of GPS, lidar and camera sensing technologies, range from 25,000 Euros for small ones and 125,000 Euros for larger ones with in-row equipment. K.U.L.T. supplies robot systems to Naio robots, an Agritechnica innovation award-winner from France. The autonomous seeding and in-row weeding robot from FarmDroid is priced at 65,000 Euros.

Future trends – Machine learning to distinguish between weed and crop; Swarms of robots will work as teams
“Machine learning will play an important role in the complex area of crop recognition,” emphasized Prof. Ruckelshausen. “Over time, field robots will learn how to distinguish more accurately between weed and crop. This is achieved through analysis of literally thousands of images recorded by field robots that enables the distinction between weeds and crop in the field.
“In other words, the field robot will be able to tell what kind of crop it sees and distinguish between harmless and critical weed. With this knowledge accumulated over time, the robots will be able to compare previous experiences, which will result not just in smarter robots, but also in smarter weeding,” commented Prof. Ruckelshausen.
Other future trends noted by Prof Ruckelshausen include quality checks of the soil and plants. This could mean that field robots could specialize in tasks. One could be measuring the moisture of a plant and if it needed water, it could send a signal to another field robot, which would react and provide the required moisture. This is what has been termed ‘swarming’. The field would be equipped with several small autonomous robots that would work as a team,” concluded Prof. Ruckelshausen.

Crop residue and stone detection
A question was raised in the webinar chat about how well the robot can cope with crop residues and stones in the field. “It is only a matter of time until a robot will be able to cope reliably with crop residues,” says Dr. Vinzent, Bavarian State Research Center for Agriculture.
Klaus Erdle, moderating the online webinar concluded that it was interesting to note that two companies with such diverse backgrounds and approaches both agreed on the promising future of mechanical weeding.
“What is clear from this afternoon’s session is that the farm has to make a first step in giving the technology a chance to adapt to the field. We cannot expect everything to work perfectly. “Chemical spraying is still a top technology, but even the chemical spraying discipline went through a lot of learning steps. It is fair to say that robots will go through many phases still, perfecting their skills, but right now as we have seen today, field robots show a promising solution that will impact practical farming in the future quite quickly,” concluded Erdle.

Field robot contest – a regular feature at DLG Feldtage exhibition
Field robots capable of “manual” weeding are under continual development by talented engineering students at universities throughout the world. A review of the many complex manoeuvres – weed recognition, weeding or headland turns – performed by field robots are shown in this science-fiction inspired video compiled by the DLG, the German Agricultural Society.
The students had planned to let their robots perform their advanced skills in the field at the international Field Robot Event (FRE), held at the DLG Feldtage exhibition, now postponed until next year due to the Covid pandemic.
The DLG has compiled a video showing the skills performed at past field robot events.