UK agricultural tractor registrations (over 50hp) showed some signs of recovery in June, although they remained below the level seen last year, according to the latest report from the Agricultural Engineers Association (AEA). At 932 machines, the monthly total was 15% down year on year but that is a much smaller decline than those seen in April and May. This is likely to be partly due to an easing of the impact of Covid-19 on delivery times as factories across Europe were generally back and running, albeit sometimes at reduced capacity. The effect of the virus, along with other factors negatively impacting on demand for tractors, such as the weather and political uncertainty, can be seen in total registrations for the first half of the year, which were down by almost a quarter, at 5,195 units. That means around 1,700 fewer tractors were registered this year, compared with the first half of 2019.
During 2019 a total of 12,333 new tractors were registered in the UK, the highest level since 2014. `The average tractor power rating sold in the UK was 164.8hp in 2019, the first time that the average power dropped since 2010, according to the AEA figures.
Tractor sizes have increased and the total measure of UK tractor horsepower sold in 2019 was 2,033,000hp compared with 1,928,000hp in 2014 and marginally ahead of the 2018 figure.
Month: 932 Units -15.3% change (compared with June 2019)
Year to Date: 5,195 Units a 24.7% change (compared with January-June 2019) 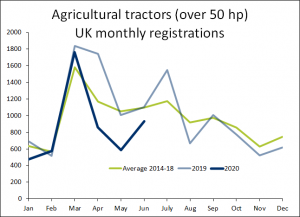