JCB is investing £100 million on a project to produce super-efficient hydrogen engines, the company has announced. A team of 100 engineers is already working on the exciting development with the recruitment of up to 50 more engineers under way as JCB targets the end of 2022 for the first machines to be available for sale to customers. The ultimate aim is that the hydrogen engines will replace the current diesel fossil fuel engines in a range of JCB machines. The JCB announcement comes a week after the Lithuanian-based AUGA group introduced what it claims is the world’s first hybrid biomethane and electric tractor for professional farm use, called the AUGA M1.

JCB’s hydrogen technology will be next on show in the Green Zone at COP26 in Glasgow as world leaders debate measures to drastically reduce greenhouse emissions. JCB’s emergence as a leader in zero-emission hydrogen technology comes as governments around the world unveil strategies to develop the infrastructure needed to support the use of hydrogen to drive down CO2 emissions.

British Prime Minister Boris Johnson said: “Great British manufacturers like JCB are developing innovative solutions to slash greenhouse emissions and advance the UK’s green industrial revolution. It was fantastic to see JCB’s super-efficient hydrogen engines, which could overhaul UK manufacturing, help us to rapidly reach our climate targets and ramp up the UK’s hydrogen economy – an exciting area that will be essential to tackling climate change, creating new jobs and attracting investment.” 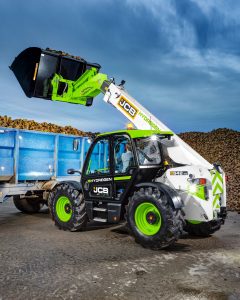