The arrival of the new Mitsubishi L200 4×4 pick-up to the Irish market has given Michael Moroney an opportunity to test its metal against Toyota’s Hilux which too have received an significant upgrade.

Taking on the established Toyota Hilux in the 4×4 pick-up market is the new Mitsubishi L200, which boasts a stronger look and more economy with additional safety features compared with in the past. And the L200 gets that stronger look to compete with Ford’s restyled and market leading Ranger. So are the L200 changes enough to bring Mitsubishi back towards the top of the 4×4 pick-up market in Ireland?

I’ve had the new-look Mitsubishi L200 on Irish roads and fields in recent weeks, following from a short test drive of the 4×4 performer at its European launch in Spain. It is in Irish conditions that its real value comes into its own. You have to drive the vehicle in Irish conditions, across our varying road surfaces and delve into some off-road work that would be required in typical farming conditions to fully appreciate the changes to the Mitsubishi L200.

For the on-road duties I’ve had the L200 across the country driving from south Wexford to Leitrim and areas in between. The driving conditions ranged from motorway comforts to more rutted rural roads, the places that the L200 needs to earn its keep.

Out on the motorway, the L200 has noticeable comfort. The five-speed automatic gearbox provides a smooth delivery of power from the new 2.2 litre turbo-diesel engine. The smaller engine compared with in the past is matched to a new automatic gearbox that allows the L200 to cruise at motorway speeds of 120km/hr at a point just under the 2000rpm mark on the engine.

That engine speed helps to deliver good road economy and I found that I achieved a range of over 760km from the L200’s 75 litre capacity fuel tank. That meant a slightly lower fuel economy figure than Mitsubishi’s WLTP quoted figure of 11.4km/l (8.8l/100km or 32mpg). That difference is accounted for by some varying road and load conditions as well as some off-road driving.

When I compared that with the performance of the Toyota Hilux with its 2.4 litre and similar power engine, of some weeks previously, the L200 comes out on top in terms of fuel economy. I can’t be surprised about that as the cruising speed on the automatic Hilux that I drove was 2200rpm on the motorway top limit. There was also the issue of some small amount of trailer work with the Hilux and that’s always eats into the economy figures in the terms of comparison.

Mitsubishi is one of the new 4×4 pick-up suppliers that is quoting the new WLTP economy and CO2 emission figures and they look impressive. And there is an AdBlue tank now fitted with help with the lower emission figures. Others will follow and I expect that the L200 will remain top of the group in terms of economy, as it did in the past with the host of new engine improvements including a lighter weight all-aluminium engine.

Mitsubishi is not the only 4×4 pick-up supplier to downsize its engine. Ford has downsized the 2.2 litre Ranger to a 2.0 twin-turbo-version with marginally more power and torque.

For 4×4 pick-up owners pulling power is a high priority. The new L200 comes with a towing rating of 3.1 tonnes, unchanged from the previous model, despite the fact there is an extra sixth leaf to the rear suspension system. Toyota’s Hilux is marginally ahead at 3.2 tonnes while the Ford Ranger stays on top at 3.5 tonnes as does the bigger engine V6 Volkswagen Amarok.

The lighter kerb weight of the new L200 paradoxically means a higher payload capacity, bringing it up to 1080kg, which is a match for Ford’s Ranger, but lower than the new 2020 model Nissan Navara rating. And the dimensions of the load area in the back remain unchanged from the past.

The more significant changes to the new Mitsubishi L200 are to the interior. The cabin area is more modern and delivers more comfort. This is especially noticeable on the motorways, rather than on smaller rutted rural roads.

There is a higher driving position, with more ground clearance and along with the raised bonnet, to give the L200 a stronger road stance. The higher ground gives the L200 a more impressive look than in the past.

Toyota has done a similar upgrade in terms of styling to the Hilux. The new Hilux that I drove was also fitted with a new six-speed automatic gearbox while out on the road, the L200 seems smoother and quieter to drive.

They both feature new improved safety kit, all of which have evolved from the car ranges. These new 4×4 pick-ups are as well-equipped as any car with the added bonus of trailer sway control included in the package. They both offer two Iso-fix kits for rear seats.

For off-road driving the Mitsubishi offers the Super-Select 4WD system which is switch operated, and now Mitsubishi offers a similar dial controlled system. The infotainment screen on the L200 is integrated into the dash while that of the Hilux stands out as a tablet-like unit. So they differ considerably in terms of dash styling. 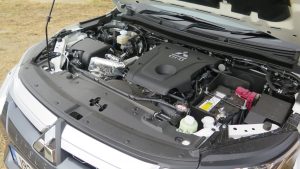 Mitsubishi is offering the new L200 at a competitive entry price of €35,000 or all prices including VAT. Toyota’s new Hilux comes on the market at €36,220 also VAT inclusive. Delve down through the price list and then you’ll see some differences emerge. The higher specification Intense version of the L200 that I drove starts from €41,935, while the Invincible version of the Hilux that I drove in previous weeks comes on the market at €46,655.

There are some important specification differences; Toyota includes a towbar and the pick-up area is lockable, both of which are extras from Mitsubishi. The Hilux with its new front end design is marginally longer and its load area is marginally bigger.

The new Mitsubishi L200 offer is an attractive one in terms of features, styling and specification. Styling is always a personal thing, and both the L200 and Hilux now have a styling offer to match the Ford Ranger.

The Hilux has solid credibility to offer, while the Mitsubishi warranty extends to 5 years versus 3 from Toyota. Entry price differences won’t sway any buyer, the differences become more noticeable as the specification levels increase. This L200 will make its mark in this new very competitive sector, but price will not be the only factor. 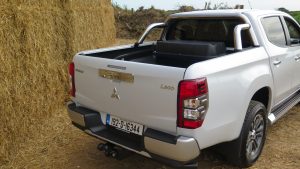 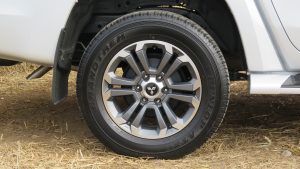