The Škoda ENYAQ iV all-electric SUV looks set to be one of the most coveted cars of 2021 and now Škoda Ireland has given customers an indication of the pricing of the new model.

Just before the opening of order books for the ENYAQ iV – which will come to Ireland in two versions, initially, Škoda has announced pre-grant prices starting from €46,570 for the ENYAQ 60 and €54,630 for the ENYAQ 80.

The ENYAQ iV 60 has a range of 390km thanks to a 58kWh battery. It comes with a generous standard equipment list, which includes 19” Proteus alloy wheels, front parking sensors, LED headlights, climate control and a 13” infotainment system.

The ENYAQ iV 80 (which is expected to make up the bulk of Irish sales) has a 77kWh battery, capable of up to 510km (as measured under WLTP) and gains additional equipment such as a heated steering wheel, drive mode select, adaptive cruise control and 3-zone climate control. Before grants are applied and inclusive of a 3-year service and tyre plan, the ENYAQ 60 will cost €46,570 on the road, and the ENYAQ iV 80 will cost from €54,360 on the road. Škoda estimates grants of up to €7,800 could be claimed, resulting in customer on the road pricing from €38,762 for the ENYAQ iV 60. Škoda will shortly announce details of how prospective customers can secure their place for the new model.

“This is Škoda’s first fully-electric car, and we anticipate that it will be in high-demand when it comes to Ireland next year,” says Škoda Ireland’s Brand Director John Donegan. “Supply will be limited on this model in 2021, with supply very much likely to outstrip demand, so customers are encouraged to act fast to secure one of these models for next year.” 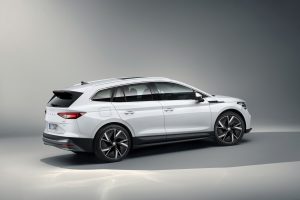 Volkswagen ID.3 brings a true electric challenge to the Golf

Seat’s Leon takes on the Golf and wins

Safety at Slurry takes on a new meaning in 2021