Ahead of its expected market launch here next September, EQS – the latest all-electric model from Mercedes-Benz – has been unveiled to international audiences.
Inspired by the new S-Class, EQS is portrayed as a car ‘appealing to almost all of the senses’. A fusion of high-tech and artificial intelligence features, it embodies more than 40 new inventions and 20 new design applications.
Amongst these is a relaxing collection of mood-enhancing ‘soundscapes’ with such calming titles as Forest Glade, Sounds of the Sea and Summer Rain. Another innovation is a unique fragrance that can be released into the interior to screen unpleasant odours that might encroach from outside.
Sound is also used to increase safety by making the EQS ‘acoustically perceptible’ on the outside, with an optional ‘driving sound’ that can be heard inside. Passengers are also greeted acoustically when approaching and leaving the vehicle.
Given their goal to have a fully carbon-neutral fleet within 20 years, EQS designers have introduced a ‘modular’ construction method likely to be followed in future battery-electric vehicles. Its cab-forward design and coupé-like appearance complement its all-electric look, as do its lights, black panel front, wheels, under-body and other aerodynamic elements.
Powered by batteries made in-house by Mercedes-Benz – which they claim have ‘better charging performance and significantly higher energy density’ – EQS will be available in two model variants: a rear wheel drive EQS 450+ (with rear axle eATS electric motor) and EQS 580 4MATIC+ all-wheel-drive version (with motors on front and rear axles).
Helped by exceptional aerodynamics and lightweight components (including a world-beating Cd value in a production car from 0.20), it has an operating range up to 770 kms (WLTP), power output of up to 385 kW and a quoted top speed limited to 210km/h.
Electrical consumption is 19.1-16.0kWh/100km and 20.0-16.9kWh/100km for the 450+ and 580 4MATIC+ models respectively. Available fast-charging systems include one that delivers an extra 300kms (WLTP) power in just 15 minutes.
With price not likely to be known until closer to arrival here, Ciaran Allen, sales manager for Mercedes-Benz in Ireland describes EQS as “the embodiment of everything Mercedes-Benz represents in terms of luxury, comfort, safety and specifications,” adding that its modular build and aerodynamic construction makes it “a mould-breaker many of whose features will be seen in future EQ models”.
Amongst its eye-catching interior elements is a concave glass MBUX Hyperscreen. Spanning the full width of the vehicle, its ‘zero-layer’ feature allows drivers move from menu-to-menu simply by placing fingertip pressure on the screen. Enabled by a ‘language understanding’ feature, its ‘Hey Mercedes’ function supports 27 languages.
Noticeable also on interior trim, wheels, and fascia is a Mercedes-Benz ‘pattern’ design based on a three-dimensional star motif first featured on a 1911 Daimler trademark.
Not counting antennas, up to 350 sensors monitor the functions of the EQS as well as driver eyelid movements and language. A high-efficiency, activated charcoal filter cleans incoming air while motors in the seats deliver up to ten different massage programmes. A 15-speaker surround sound system produces an unusually expressive, natural sound while seat heating and inflatable air chambers replicate the body-soothing effects of a ‘hot stones’ treatment. 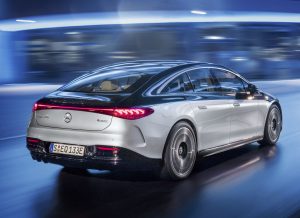 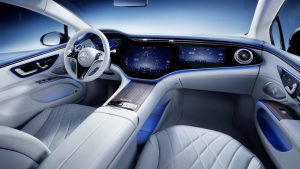