AGCO/Fendt is developing the next generation of field robots as part of a strategic research project. The new series of Xaver sowing robots differs from the last two studies, in more than just appearance. The inner workings, the ‘seed units’, are also completely new.

Automation and autonomy are hot topics when it comes to sustainable farming technology. As such, the Research & Advanced Engineering department of the agricultural engineering manufacturer, AGCO/Fendt, has been working on strategic future topics like swarm technology and robotics since 2017. What’s more, ecological benefits such as low ground pressure and energy consumption, zero noise pollution, leaks or emissions, are playing an increasingly important role in a modern agriculture. Tiresome, manual work that still calls for a number of labourers working on the field, will be automated in the future. This eliminates the burden of monotonous work and paves the way for more sustainably produced foods.

Agronomy in the smallest of farmhands

The latest generation of the Fendt Xaver comes with an embedded solution developed by the AGCO Group, a seed unit from Precision Planting.

“Through Precision Planting, we have been able to draw on the AGCO Group’s agronomy expertise and proven technology to produce our seed sowing robots,” says Dr. Benno Pichlmaier, Director Global Technology & Innovation. “We were able to adapt the modules of the first Xaver generation and combine them with the new seed unit. Proven concepts have been combined with the innovative robotics design, which has led to a new, integrated system.”

The vSet® solution quickly spaces the seed with utmost precision. With the help of an electrically driven control system, individual grains are deposited with centimetre-accuracy at a pre-defined distance in the row. The grains are dropped in the furrow by a flexible firmer. We are looking forward to installing Smart Firmer® from Precision Planting in the future – with sensors measuring soil moisture, temperature, humus content and plant residues. This varies the seed depth and seed strength according to the local conditions.

Thanks to the now three-wheeled concept, the last wheel not only drives the robot, but also acts as a gauge wheel. When it passes over, it compacts the soil gently to the side and above the seed, closing the soil around the seed grain to ensure the moisture supply and initiate germination.

The latest generation of the field robot is also equipped with the VarioGuide lane guidance system, which controls the robot with centimetre-accuracy. Fendt Xaver is also integrated into the FendtONE platform and can be managed together with the rest of the machine fleet.

This allows a seamless exchange of field data, including waylines, between tractor and robot as well as between robot and database, making light work of creating job orders.

“The cornerstones of our swarm system are scalability in terms of investment costs and impact, minimising failure risks from robot redundancy, and integrating autonomy and precision farming. After sowing with the Xaver, it ‘maps’ all the useful crops in the field, and we can use this for all our follow-up work, such as plant protection, mechanical weed control and fertilisation. Regardless of whether this is done by robots or tractors,” says Dr. Benno Pichlmaier. “The prerequisite for swarm technology is a reliable network coverage for communication. Going forward, we will use the imminent implementation of the digital strategy with a 5G network expansion in Germany and worldwide. The robots will feature future Farming 4.0 functions even with larger and more dynamic data volumes.”

The seed sowing robots use the Fendt Xaver Cloud to receive commands and return their status reports. The system is web-based and managed independently in the Xaver app. This means that the farmer or contractor can access the entire fleet or individual robots in the field on a tablet or from the office PC. The app itself can also be opened from the FendtONE portal. There is no additional user login. The design and user interface of the Xaver app meet FendtONE standards, so it is intuitive even for first-time users.

The first thing that is evident with the latest generation of the Fendt Xaver is the design switch from four to three wheels.

The larger wheels offer increased ground contact, greater ground clearance and more precise depth guidance. The new generation can really play out its strength on the headland. At just two metres, the new Fendt Xaver needs hardly any space when turning and the rear steering and AWD mean it can perform the process energy-efficiently even on soft ground.

As well as being quieter, added wheel weights in the front wheels also mean a greater coulter pressure for sowing in loamy soils. Fully ballasted, the robot reaches a maximum total weight of 250 kg. It is less than 150 kg unladen.

The capacity of the lithium-ion battery has been increased to 2.6 kWh. A Fendt Xaver can work for about 1.5 hours before it needs to return to the base station for charging.

A swarm of six robot units achieves an area coverage of around 3 ha/h including loading times of around 2 ha/h. The system enables round-the-clock, autonomous use.

The aim of the robotics approach is to provide an intelligent, low impact and powerful alternative to the continuous trend of ever-heavier large machines. Heavy machinery causes damage, especially on softer or wetter ground, which causes loss of yield and shortens field work days.

Consumers expect sustainable, organically produced food with less or zero use of pesticides. This is currently only possible with a lot of manual, human labour. Robots can take on these monotonous, physically strenuous tasks. The basis for this, regardless of the specific fruit species, is precision sowing. It makes follow-up work, such as hoeing, much easier and allows farmers to monitor and maintain quality.

“The energy costs and, with that, the CO2 footprint is significantly lower compared to conventional technology when you use a Xaver. This is due both to the negligible pressure impact on the field from the low weight, and the potential lack of consumers like air-con and power steering, as there’s no driver sat in the machine. Last but not least, the efficient and simple direct electric drive helps in this respect,” says Dr. Benno Pichlmaier.

In addition to the energy aspects, ecological elements also play a role. The seed sowing robots have no air pollutants or noise emissions, nor can they leak oil. Ground pressure is up to 80% lower than with conventional machine systems.

The new generation of Fendt Xaver combines the advantages of compact swarm robots with the performance of Precision Planting’s seed unit and the integrated FendtONE digital platform. 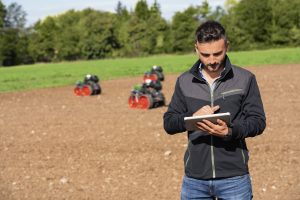 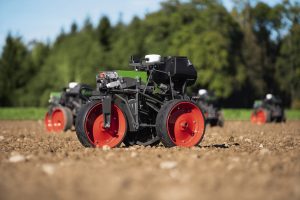