In a comprehensive test conducted by the German Agricultural Society (DLG), the CLAAS dialogue system CEMOS for tractors impressively demonstrated its superior ability to increase overall efficiency. An optimisation potential of up to 21 percent was recorded for cultivation work – on a sustained basis.

Makes even the best operators even better

In mid-September, ten experienced drivers from Germany, France, Poland and Denmark gathered on a large farm in Saxony-Anhalt to pit themselves against the optimisation potential of the dialogue-based operator assistance system CEMOS for Tractors. Test engineers from the DLG Test Centre Machinery and Farm Inputs were on hand to measure the ground speed and fuel consumption of all the test variants. The way in which both the operators and CEMOS for Tractors adjusted the machine settings during the test drives was also documented. 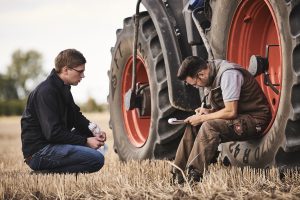 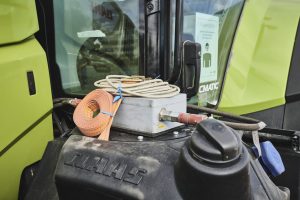 Using mounted cultivators, the operators shallow- and deep-cultivated the strips of slightly and very loamy sand on the test plots over a three-day period. In the first part of the test, the operators – both farmers and agricultural contractors – had the chance to adjust relevant settings such as front ballast, wheel weights, tyre pressure and engine droop on the two Claas Axion 870 CMATIC tractors as they saw fit during the initial set-up and to continue adjusting them during the test drive – without using CEMOS for Tractors. Claas provided not only the tractors but also a selection of different ballast weights. They could also rapidly adjust the internal tyre pressure using the integrated Claas CTIC 2800 tyre pressure control system. All the drivers continued to adjust the settings until they achieved what they considered to be the optimum performance. Many participants had done their homework and researched the options for optimising the parameter settings in advance – for example in terms of consumption and torque, optimal rpm ranges and speed fields with the optimum efficiency.  These drivers were true professionals, without a doubt.

Then all the test drives were repeated, but with CEMOS for Tractors activated. This time the drivers confirmed the suggestions for optimisation that they judged to be appropriate or requested alternative suggestions from CEMOS for Tractors. Here too, ballast weights were replaced, tyre pressure was adjusted and engine droop was changed as necessary. This process also continued until the optimum performance for the test plots and the prevailing conditions was reached.

On successful completion of the test drives, the recorded values were analysed and evaluated at the DLG Test Centre. Values recorded for all drivers from the variants with and without CEMOS for Tractors were compared and averaged to give an overall rating. The results: CEMOS went way beyond the mere effect of a tyre pressure control system: it was able to reduce diesel consumption by up to 16.8 percent and at the same time increase the area output by up to 16.3 percent for 80 percent of the operators. If you extrapolate the fuel consumption figures over 3000 operating hours of tillage, a large tractor with a diesel consumption rate of 50 l/h without CEMOS for Tractors and 41.6 l/h with it could save up to 25,200 l of diesel and 67,000 kg CO2! In addition, by increasingly area output, the hours worked by the farmer or contractor are reduced by up to 490, which is equivalent to almost 50 working days. 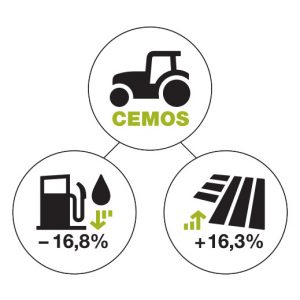 You can calculate the potential savings for your own farm online using the CEMOS calculator: https://www.claas.co.uk/products/technologies/cemos-2020/calculator

The certified results are all the more remarkable, given that the participants were top-class drivers who had had time to think carefully about optimising the tractor settings in advance and had prepared themselves thoroughly for the test. CEMOS for Tractors is the only system of its kind on the market that goes beyond the mere impact of adjusting tyre pressure, ballast and hydraulic traction control – it manages to adjust the settings to achieve the absolute optimum in terms of both performance and energy consumption. CEMOS for Tractors sets new standards as a combined formula for litre per hectare (l/h) and hectare per hour (ha/h), and this has now been confirmed by an independent test institute. Furthermore, CEMOS for Tractors optimises not only the tractor and attached implement, but also the operator. By continuously interacting with CEMOS for Tractors, the operator is constantly learning – and this is a continuous process, since conditions are continuously changing from one year to the next, whatever the job.

“Also unique on the market is the plough assistant integrated into CEMOS for Tractors”, explains Guido Hilderink, Tractor Product Manager at Claas Vertriebsgesellschaft mbH. “However, this was not included in the DLG test.” As our experience and preliminary tests undertaken by well-known trade journals confirm, this offers further significant potential for optimisation which is enhanced by CEMOS for Tractors. If the pull line, front furrow width or camber are incorrectly set, it can have a massive impact on diesel consumption and work quality/performance. These sort of setting errors are avoided with CEMOS for Tractors, because the system stores the key figures for all common plough manufacturers.”

Since the fundamental CEMOS concept can be extended to virtually all tractor applications, there are plans to add further areas of deployment during the course of the next year. “Bolstered by the DLG test, we are certain that CEMOS for Tractors will succeed on the market”, explains Guido Hilderink. “It already marks a pioneering step in tractor development. We know from experience that highly motivated and extremely experienced drivers are using the system to further improve their performance.”

CEMOS for tractors is available as a factory-fitted option for the Claas Arion 500 CMATIC, Arion 600 CMATIC, Axion 800 CMATIC and Axion 900 CMATIC and can be retrofitted to tractors in this series with CEBIS TOUCH built from 2018.