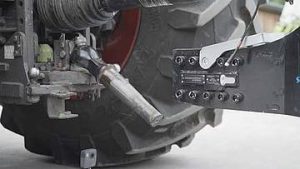 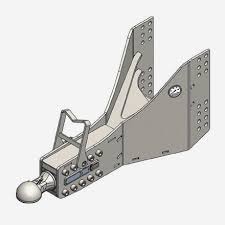 The system is triggered using a cable remote control which has to be installed in the tractor cab. The prerequisite for releasing disconnection is that the vehicle speed is no higher than 7 kph. The vehicle speed is queried by means of a 7-pin connector on the tractor. If all of the prerequisites are met, release is issued and a solenoid valve is actuated. The locking cylinder itself is then actuated hydraulically. This is carried out through a hydraulic system installed in the drawbar with a preload of at least 140 bar. At the same time, a pressure drop in the supply line (with the red hose coupling) is generated, causing the brakes on the baler, for instance, to be applied in order to support disconnection by the emergency release system. For this purpose, it is necessary to mount the pressure relief valve included in the scope of delivery directly without any line in between to the red hose coupling head.

To test the Scharmüller emergency release system the DLG team mounted the system on a Krone BigPack 1290 HDP XC big baler and analysed in terms of six different aspects in combination with a Fendt 926 tractor in order to guarantee a comprehensive assessment of the system.

Function and quality of work
The central function of this system is to minimise the risk of a fire on the implement spreading to the tractor. Disconnection takes place within a few seconds after actuating the two pushbuttons on the cable remote control. Consequential damage to the tractor caused e.g. by tearing off the hydraulic lines and pulling out cable connections, etc. cannot be avoided entirely, but it can be minimised, for instance, by using the recommended breakaway couplings for the hydraulic lines. In summary, all of the requirements on the function of the system are met. 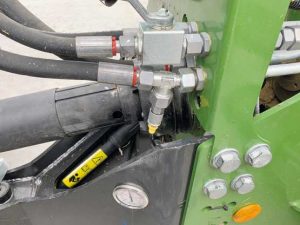 Handling, operation and maintenance
When retrofitting the emergency release system, Scharmüller only has to be informed about the manufacturer and the model designation so that the company can check the drawbar hole pattern (Figure 6) and adapt it for the specific customer if necessary. Approvals or other manufacturer-specific implement specifications are not necessary. The time required to replace the standard drawbar with the Scharmüller emergency release system is around 3-4 hours. Installation of the coupling device could be described a little more precisely in the manual, but Scharmüller is planning to offer the connection hoses required for the compressed air and hydraulics in the form of a kit to make installation easier and further reduce the time required to install the system.

In addition to a thorough check of ball coupling wear and the general condition of the coupling device (in this regard, see also DLG Expert Knowledge pamphlet 387 – Towing hitches on tractors), three lubricating points have to be lubricated every 50 hours of operation as part of maintenance.
The function of the emergency release system should be checked during the annual service. After being triggered, the system can be reassembled without a great deal of effort. The only aspect to note in this context is that a small quantity of hydraulic oil escapes and a safety plate (Figure 9) has to be renewed if it has not been removed beforehand for testing.
While operation of the emergency release system is not entirely intuitive due to the fact that two buttons have to be pressed simultaneously in order to trigger it, this minimises the risk of incorrect operation by the driver or unintentional actuation by children, for instance. It therefore offers a very good compromise. It is recommended that a new driver test the operation of the system once while stationary to overcome possible reservations about pressing the buttons in an emergency. Ultimately, the installation and operating instructions certainly offer potential for improvement, but the installation and maintenance effort is low on the whole. After the first test run, operation is also simple.

Electronics and digitalisation
The cable remote control is connected with a polyurethane-sheathed cable. This is an extremely robust control cable which is characterised by high abrasion and notching resistance. It is also resistant to UV radiation and therefore does not harden over time. If a cable break nevertheless occurs, it is detected and indicated on the cable remote control. While the electrical connectors in the drawbar are not designed for high pressure or steam jet cleaners aimed directly at the connectors, the IP 65 system of protection means that they are dust-tight and also offer protection against water sprayed (nozzle) from any angle.
Of course, a predetermined breaking point in the signal line to the cable remote control would also be desirable to prevent it from being torn out from the cab when separating the tractor/baler combination. On the whole, however, all requirements on the electronics are met.

Environmental and resource protection
When the system is triggered in an emergency, the tearing of hydraulic lines between the tractor and implement and consequently the escape of hydraulic oil cannot be ruled out on separation of the tractor/baler combination. In relation to a gutted tractor and the quantities of fluids that would then escape, however, this is a far better alternative; this test criterion is therefore fulfilled.

Check of compliance with work safety specifications
In addition to the manufacturer’s declaration of conformity, expert reports according to Paragraph 22a of the German Vehicle Licensing Regulations (StVZO) for the drawbar, the ball coupling and the triggering device as well as a finite elements analysis concerning the strength of the drawbar were also submitted.

Practical use
The practical test including evaluation by users at a contracting company were an essential element of this criterion. In addition to the DLG test engineer, five practitioners evaluated the presented emergency release system within the context of the test. The practitioners, some of whom operate agricultural machinery for around 2,000 hours per year, offered up to 150 hours of experience in operating the presented system. The function of the system was appraised in various tests.
On the whole, the Scharmüller emergency release system was evaluated as good to very good across all of the criteria by the practitioners. The question of whether the system is suitable for minimising the spread of a fire to the tractor in an emergency was clearly affirmed by all of the testers. With a list price of around €5,000 the price/performance ratio was also evaluated by DLG as being good.