As part of the natural evolution of the Claas Lexion range, the introduction of the new second generation Lexion 6000 and 5000 range of straw-walkers combine harvesters see’s not only a considerable expansion in models available, but also the introduction of a host of new features all designed to provide a further increase in output and efficiency.
Redesigned from the ground up, central to the new Lexion 6000/5000 range of combines is the completely new APS Synflow Walker threshing system, which sets a new standard for the threshing and separation performance from straw-walker combines. A total of seven new models are available in the range, comprising four 6-walker Lexion 6000 versions and three 5-walker Lexion 5000 models. This compares to five models in the previous Lexion 600 range, of which three were six-walker and two were five-walker.
Topping the range is the new Lexion 6900 which, with a power output of 507hp and maximum grain tank capacity of 13,500 litres, further extends the overlap between Lexion straw-walker and Hybrid models.
In addition to the new Synflow Walker threshing system, the Lexion 6000/5000 also features the well-proven Jetstream cleaning system on all models. Tank capacities and unloading volumes have also been increased, while new engines provide greater power and the introduction of Dynamic Power. In the cab, the operator benefits from a state-of-the-art workplace with the latest touchscreen Cebis terminal and the option of advanced automated operator assistance systems.

APS Synflow Walker threshing
The APS threshing system has been key to the high performance of the Lexion since its introduction 25 years ago. The development of the new APS Synflow Walker system takes the threshing and separation performance from the Lexion 6000/5000 to a new level. This is achieved by bringing together the accelerated crop flow provided by the APS system but adding to this an additional separator drum after the threshing drum.
Central to the all-new threshing system is the massive 755mm diameter threshing drum, fitted with 10 rasp bars, which is 26% larger than the 600mm drum on the Lexion 600 range. Behind this is the new 600mm-diameter separator drum that provides additional gentle separation of grain from the straw.
The greater diameter of the main threshing and separating drums has the benefit that the concave wrap angle is shallower at 132° and 116° respectively. As a result, straw flow through the APS Synflow Walker system is flatter and gentler, resulting in improved straw quality, but load on the threshing system is reduced, so saving power and fuel. 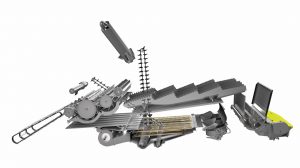 The shallower angles also mean that the main concave area has been considerably increased. At 1.30m2, the 1,420mm-wide unit fitted to the 5-walker Lexion 5000 now has a larger concave area than the current largest Lexion 670 six-walker model (1.22m2) while in the 1,700mm-wide unit fitted to Lexion 6000 models it’s a massive 1.55m2.
Due to the wider diameter and higher centrifugal speed of the rasp bars, to maintain velocity this means that drum speed has been reduced, and is now infinitely variable using Cebis from 330-930rpm. Drum speed is also synchronised across all four drums.
For optimum performance across all crop types and conditions, the main concaves are easily infinitely adjusted hydraulically using Cebis. This provides both parallel and synchronised adjustment of the pre-concave, threshing concave and separator concaves, so ensuring an even flow of material through the threshing system. Where it’s necessary to change the concaves, for instance when harvesting beans, this is quickly and easily done and 40% of the main concave can be pulled out sideways.
Where greater threshing intensity is needed, for instance in difficult to thresh crops or for de-awning barley, the APS Synflow Walker system incorporates an additional pivoting concave bar located between the pre-separation concave and the main concave, again engaged hydraulically using Cebis.

Jet Stream cleaning
A new feature on Lexion 6000/5000 straw-walker combines is the Jet Stream cleaning system, which was previously only found on Lexion Hybrid models. Depending on model, the six or eight turbine fans venting through a dual straw-walker step and a long airflow equalisation channel provide intensive pre-cleaning of the grain. The sieves and fan are adjusted electrically from the cab.
The Lexion 6000/5000 range also incorporates the latest Quantimeter yield measuring system, which uses a pressure cell in the grain elevator delivery point to accurately record yield without needing the thousand grain weight. Not only is this far more accurate and robust, but it only needs calibrating once a year for each crop type. It is also fully compatible with Telematics for yield mapping and record keeping.

Advanced technology
The new pivoting concave bar, synchronised drum speed and concave adjustment systems are fully integrated into Cemos Auto Threshing, which uses information from the grain quality camera and Quantimeter to automatically adjust the concave settings and drum speed.
Where Cemos Auto Cleaning is fitted this will automatically adjust the Jetstream fan speed and the upper and lower sieve settings. All this information is also now fully integrated into the new Cebis touchscreen terminal.
Sensors in the new APS Synflow Walker and secondary separation system are also used by Auto Crop Flow to monitor flow and load through the Lexion and to automatically restrict crop entering the combine should it detect a potential blockage, so allowing the operator to confidently push the combine without the risk of overloading it.
As before, Cruise Pilot and the Auto Slope grain cleaning system are also available on the Lexion 6000/5000.

High capacity grain handling
To handle the increased throughput from the Lexion 6000/5000, grain tank capacity ranges from 9,000 litres on the smallest Lexion 5300 to 13,500 litres on the Lexion 6900. Access into the tank for cleaning and maintenance has also been improved.
Seven different unloading augers with lengths up to 12m are available, which have a forward pivot angle of 105° for improved visibility. Depending on model and auger diameter, the maximum emptying speed is 180 litres/second on the Lexion 6900, enabling its 13,800 litre tank to be emptied in just 75 seconds. If necessary, the unloading speed can be halved to 90 litres/second for topping off trailers and the augers are turned off gradually to ensure the unloading auger is fully emptied. 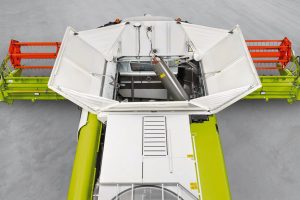 Touchscreen Cebis
All the main functions are controlled using the CMotion control, which incorporates a new favourites management system, and the latest Cebis touchscreen terminal, which can be adjusted independent of the armrest or even swung out of the way for improved visibility.
The operator has the flexibility of having three different ways of adjusting the main machine settings. This can be done using either the Cebis touchscreen terminal, the rotary push switch on the Cebis control panel, or via direct switches on the new Lexion armrest which open a dialogue box in Cebis to show the level of adjustment. The armrest is fully adjustable for reach and height and also includes radio and telephone controls and a USB charger socket. 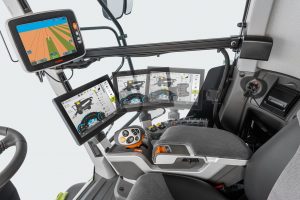 Greater engine power
The Lexion 6000/5000 is powered by either MAN or Mercedes-Benz engines with power outputs ranging from 313hp on the smallest Lexion 5300 to a high of 507hp for the largest Lexion 6900.
For optimum fuel efficiency and economy, another new feature now available on all Lexion 6000/5000 straw-walker models is the Dynamic Power intelligent engine management system which automatically adjusts engine power output relative to load. Dynamic Cooling variable fan cooling is also standard on all models, which draws clean air in from above the combine and blows it out down over the sides of the machine.
A completely new drive system, based on that used in the Jaguar forage harvester, ensures a more positive, smooth engagement of the threshing and auger systems. A new clutch system is used to engage and tension the belts, resulting in improved belt life. The straight line design of the drive system results in lower power loss and has reduced the number of belts. This not only eases maintenance, but has also resulted in fewer ledges and angles on which dust can gather, so improving overall cleanliness.
The new Lexion range also includes for the first time a tracked 5-walker machine, the Lexion 550 TERRA TRAC, which is only available as a tracked machine. Irrespective of whether they are fitted with the TERRA TRAC track system or wheels, all new Lexion 6000/5000 models are capable of travelling at 40kph to keep transfer time to a minimum. All wheeled machines are now available with a differential lock and larger tyre sizes can also be specified for both the front and back axle, going up to 42 inches and a diameter of 2.15m on the front axle and 30 inches with a diameter up to 1.75m on the rear.