While fuel economy has to be a priority for any farming business, it has to be considered against the other features that farm contractors and farmers will expect such as load capacity, towing and off-road ability. Commercial vans are not often considered as an option on farms, while most farm and forestry contractors have multiple vans and 4×4’s in their fleets.

Ford has a new van option on offer that provides some fresh room of thought. Called the Transit Custom Trail, this new van could provide an alternative to the very popular Ford Ranger, the brand’s best-selling 4×4 pick-up on the Irish market.

This new option, in the shape of the Ford Transit Custom Trail version, goes some of the way toward delivering enhanced off-road ability with van load capacity. Ford claims that this new Transit Custom Trail has been designed specifically to operate in tougher working environments. It comes with enhanced traction provided by a new mechanical limited-slip differential (mLSD) on front-wheel drive. This uses new technology to lock the van’s front driving wheels so as to minimise wheel-slip in difficult driving conditions as Ford takes Transit Custom on the off-road trail.

Ford claims that the van’s Electronic Stability Control system has also been recalibrated to harmonise with the mLSD. The compact size of this new mLSD system and its lightweight design means that there is no compromise in the van’s payload capacity and interior load volume.

Ford also claims that the enhanced traction is delivered seamlessly and silently, with no additional inputs required from the driver. There are no dash buttons to engage the system, it simply works to give enhanced traction when the system triggers that it needs it. The mLSD’s mechanical design has no additional servicing requirements and is covered by the standard Ford warranty.

The limited off-road ability of the Ford Transit Custom Trail is noticeably enhanced by the Goodyear Efficiency Grip 215/75R16C tyres that have good grip. The only downside of these tyres is the additional road noise and feedback at higher motorway type speeds.

Ford also offers a full four-wheel-drive option for the bigger Transit vans. This system works with the van’s electronic stability control and continually monitors traction to automatically distribute torque to the wheels with most grip, with claims to minimise wheel-slip in low-grip situations.

For many farm and forestry contractors the decision to make the move to a Ford Transit Custom Trail has to be considered against the option of a Ford Ranger pick-up with stronger off-road ability. That’s the reason why I’ve included this comparison in this test report.

The van option offers seating for three (six in the more expensive double cab version) compared with five in the pick-up. The covered and secure load space offered in the van has its load capacity and security benefits.

The other significant differences relate to towing ability, where the Ranger excels at 3.5 tonnes, ahead of the Transit Custom Trail rating of 2.8 tonnes. The Custom Trail van has slightly higher payload ability as its marginal a benefit.

The Trail models also come with a higher level of interior specification, which includes full leather seating as standard bringing, durability and wipe-clean flexibility to the cabin. Standard air conditioning ensures a comfortable environment whatever the outside weather and a Quickclear heated windscreen allows an easy departure in freezing conditions. Power-foldable door mirrors and auto lighting are also standard.

Transit Custom Trail is available in a range of body styles with GVM from 3,000 kg to 3,400 kg, including panel van, double-cab-in-van and kombi in a choice of two wheelbases. There is also the option of a single chassis cab and double chassis cab variants, enabling it to serve as a capable donor vehicle for bespoke vehicles to support specialised business needs.

Apart from the status of driving a modern 4×4 pick-up versus a van, you need to consider the specification offers and they are outlined in the table with this article. The comparisons are clear, the power and performance are livelier in the lighter front wheel drive Transit Custom Trail while the towing rating and the off-road ability weigh in favour of the Ranger.

The Transit Custom Trail is marginally more expensive than the Range XLT, which is an impressive and high specification 4×4 double cab pick-up. While the running costs of the Transit Custom Trail will be marginally less than the Ranger due to the fuel economy figures that delivers a longer range from a small capacity fuel tank, the ownership costs need to include that dreaded depreciation figure.

The simple truth is that vans such as the Transit Custom Trail, even with all the extra features, tend to depreciate faster than higher specification, double cab 4×4’s. A cursory look through the popular car sales websites will make that clear, be prepared for a doubling in depreciation cost with the van option. The message from this is that the Transit Custom Trail offers the benefits of marginally better road ability when the going gets tough, better comfort and load carrying ability than the Ranger, but be prepared for higher ownership costs due solely to the strong re-sale values for the tougher Ranger 4×4.http://www.ford.ie 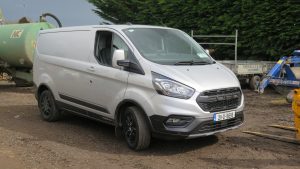 The new Ford Transit Custom Trail comes with additional off-road ability by means of a mechanical limited-slip differential on its front driving axles along with a higher specification cab. Entry prices for the 170bhp version start from €29,194 plus VAT.