Audi has a new option for the entry A1 model with the arrival of the citycarver edition that has hints of an SUV ambition as Michael Moroney found when he took the 2020 version of the A1 on the road in the recent weeks for Wheels & Fields readers.

The small Audi A1 has, I believe, been possibly one of the best supermini class cars to drive. Its compact design continues to evolve and the latest generation features fresh styling and now a new Citycarver version, in an attempt to give it a hint of a compact SUV feel.

The citycarver look aims to give the car a more muscular look than the more basic Sportback versions. That’s noticeable in the wheel arch features and redesigned sills in a contrasting colour. The citycarver has underbody protection in a stainless steel finish and Audi claims that the raised suspension gives of around four centimetres gives additional ground clearance for easier entry and better driving visibility.

At the front there is a large black grille that has hints of the Audi Q models to give a compact SUV feeling. There are also two slots above the grille differentiate it from the A1 Sportback. Only those who appreciate such subtle design features will identify the citycarver models as being special. Within the car, the Audi A1 citcarver values give an enhanced driving feel, while for me the Audi A1 has always been a little special.

Audi has further tuned the 1.0 litre, 3-cylinder petrol engine to give it a smooth driving performance that some other similar engines would aspire to. The TSI specification gives the turbo-petrol engine impressive acceleration. It’s slightly faster from the blocks than the similar engine Sportback models, even though it’s slightly heavier.

Add the seven speed S Tronic automatic gearbox to the specification, which is standard on this A1 citycarver model and there is no loss in performance from this lively small car. And the automatic drive is smooth and exciting, making the car so enjoyable to drive.

This new Audi A1 citycarver will not be noted for its fuel economy. The official figures at 15.6km/litre (6.4/100km or 44mpg) are not wildly impressive for a small car. I came close to that realistic WLPT result so there were no surprises in terms of economy, just a slight disappointment as I achieved a range of 550km from the 40 litre fuel tank.

What all this does is hint to me that electric drive should be offered for the Audi A1 in the same way that it’s offered in the new Opel Corsa. An electric A1 would be one of the dream cars for me, and could deliver impressive acceleration in the cleanest way possible for a car that’s clearly billed as a city car. And Audi has the technology, so I expect to see an electric version that would make so much sense, in the near future.

Almost everything else about the Audi A1 is very impressive from the large disc brakes on all four wheels to the extended luggage area. The dash area is very attractive and functional with Apple CarPlay easily accessible on the 8.8-inch MMI touch screen while a very impressive 10.25-inch fully digital cockpit display has a range of function that are easy to get comfortable with. The clarity of the digital cockpit is most impressive and is carried across from bigger models in the Audi range into a compact cockpit dash that’s just lovely to use.

The new Audi Ai also shows a big improvement in safety features across measurement features from the A1 of the past according to the latest 2019 Euro NCAP ratings. This new car delivered a huge increase in pedestrian safety as well as improvements in occupant and child safety features over the previous model tested in 2010.

When I said almost everything about the A1 is impressive, I was excluding comment on the price. This is a very expensive small car with the A1 citycarver versions costing from €30,150 for the six-speed manual gearbox version and rising to €33,045 for the S Tronic automatic version. That’s an expensive small car that you’ll struggle to in terms of value. If you can stretch that far you won’t be disappointed with the style, features and performance, even if you had wished for greater economy. 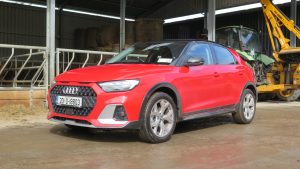 0 replies on “Audi raises up the A1 in citycarver style”